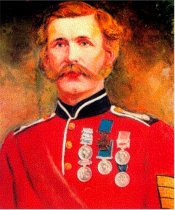 The Battle of Inkerman

On 5 November 1854, Corporal John Prettyjohns won the Victoria Cross during the Battle of Inkerman.

The 2 November 1854 was an active day, 312 rank and file marched off from the heights of Balaklava, for the Light Division, under the command of Captain Hopkins, RMLI, the detachment was divided into four companies, taking turn in the trenches. On the morning of the 5th, the relief, which had just returned, were preparing their rude breakfast; the firing from Sebastopol was gradually increased, and then commenced in our rear. Nothing could be distinguished but fog and smoke from where we were.

The bugle sounded the ‘Fall-in’ at the double, and officers were flying about giving orders, saying vast columns of the enemy were moving up to our rear. The roll of musketry was terrific; we were advanced cautiously until bullets began to fall in amongst us, the Sergeant-Major was the first man killed; order given to lay (sic) down; it was well we did so; a rush of bullets passed over us: then we gave them three rounds, kneeling, into their close columns.

At the same time some seamen opened fire from some heavy guns into their left flank, and this drove them back into the fog and smoke. Our Commanding Officer received several orders from mounted officers at this critical time; first it was ‘advance’, then it was ‘hold your ground and prevent a junction or communication with the town’.

The Inkermann Caves were occupied by the enemy’s sharpshooters, who were picking off our officers and gunners; between us and these men was an open space exposed to the broadside fire of a frigate in the harbour under shelter of the wall, but she had been heeled over so as to clear the muzzles of her guns, when fired, from striking the wall; thus, her fire raked the open part. The Caves were to be cleared, and the Marines ordered to do it; as soon as we showed ourselves in the open, a broadside from the frigate thinned our ranks; Captain March fell wounded. Captain Hopkins ordered his men to lie down under a bit of rising ground, and ordered two privates, Pat Sullivan and another man to take the Captain back, and there he stood amidst a shower of shot and shell, seeing him removed. A division under Sergeant Richards and Corporal Prettyjohns, was then thrown out to clear the caves, what became of the Commanding Officer and the others I never knew, so many statements have been made.

We, under Richards and Prettyjohns, soon cleared the caves, but found our ammunition nearly all expended, and a new batch of the foe were creeping up the hillside in single file, at the back. Prettyjohns, a muscular West Countryman, said, ‘Well lads, we are just in for a warming, and it will be every man for himself in a few minutes. Look alive, my hearties, and collect all the stones handy, and pile them on the ridge in front of you. When I grip the front man you let go the biggest stones upon those fellows behind’.

As soon as the first man stood on the level, Prettyjohns gripped him and gave him a Westcountry buttock, threw him over upon the men following, and a shower of stones from the others knocked the leaders over. Away they went, tumbling one over the other, down the incline; we gave them a parting volley, and retired out of sight to load; they made off and left us, although there was sufficient to have eaten us up.

Later in the day we were recalled, and to keep clear of the frigate’s fire had to keep to our left, passing over the field of slaughter.

On being mustered, if my memory is not at fault, twenty-one had been killed and disabled, and we felt proud of our own Commanding Officer, who stood fine, like a hero, helping Captain March. Corporal Prettyjohns received the VC, Colour Sergeant Jordan the Medal and £20 for Distinguished Conduct in the Field, Captain Hopkins a C.B., others were recommended.

—- a report by Sergeant Turner RM

Reported for gallantry at the Battle of Inkerman, having placed himself in an advanced position; and noticed, as having himself shot four Russians.

On 5th November 1854 at the Battle of Inkerman, Corporal Prettyjohn's platoon went to clear out some caves which were occupied by snipers. In doing so they used up almost all of their ammunition, and then noticed fresh parties of Russians creeping up the hill in single file. Corporal Prettyjohn gave instructions to his men to collect as many stones as possible which they could use instead of ammunition. When the first Russian appeared he was seized by the corporal and thrown down the slope. The others were greeted by a hail of stones and retreated.